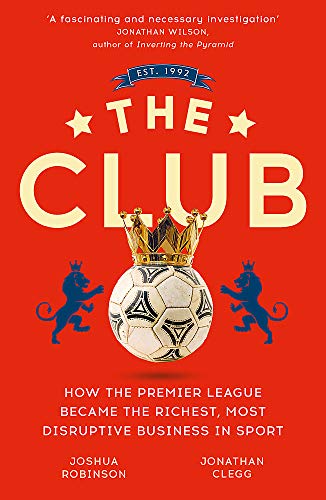 The Club: How the Premier League Became the Richest, Most Disruptive Business in Sport por Jonathan Clegg

Jonathan Clegg con The Club: How the Premier League Became the Richest, Most Disruptive Business in Sport

Críticas A brilliant book on the business history of the Premier League * Independent * Informative and regularly entertains * FourFourTwo * A tale told with much verve and some wit by two experienced sports journalists ... Revelatory * Spectator * Brilliant -- Miguel Delaney * Independent * A vivid portrait ... but also a candid account of the league's imperialist present and likely future ... it's quite an achievement * Tito Football * Richly detailed, remarkably told . . . Clegg and Robinson provide unparalleled access to the people who make the league go * Billy Beane * Magnificent . . . a fine job they have done explaining how English football went from moribund national embarrassment to globe-bestriding colossus. Witty, pacy, thorough, this is a book hard to put down. * Mail on Sunday * Clegg and Robinson are expert storytellers in unspooling the narrative of one of Britain's most successful exports, illustrating the creative tensions between owners that made it possible. The work is at once thorough but also readable and entertaining, with protagonists presented as real live characters, rather than faceless suits: a testament to their reporting and writing skills * Gabriele Marcotti * A fascinating and necessary investigation into the forces that led to the creation of the Premier League. Meticulous in its research * Jonathan Wilson, author of Inverting the Pyramid * A shrewd and colourful account of the Premier League's business history * Jonathan Northcroft, Sunday Times * captures the Premier League's startling and continuing evolution...Robinson and Clegg specialise in access...the scene setting is lively * Financial Times * A fascinating book, by two witty and meticulous sports writers * Sunday Times * A jaunty journey through the past quarter of a century in English football * The Times * Astute ... forensic and impeccably sourced * The Economist * The most fascinating book ever written about the Premier League * Mundial * Magnificent ... Witty, pacy, thorough, this is a book hard to put down * Mail on Sunday * A remarkable and astonishing transformation ... detailed with panache * The Sunday Times * Reseña del editor How did English football - once known for its stale pies, bad book-keeping and hooligans - become a commercial powerhouse and the world's premium popular entertainment? This was a business empire built in only twenty-five years on ambition, experimentation and gambler's luck. Lead by a motley cast of executives, Russian oligarchs, Arab Sheikhs, Asian Titans, American Tycoons, battle-hardened managers, ruthless agents and the Murdoch media - the Premier League has been carved up, rebranded and exported to phenomenal 185 countries. The United Nations only recognizes 193. But the extraordinary profit of bringing England's ageing industrial towns to a compulsive global attention has come at a cost. Today, as players are sold for hundreds of millions and clubs are valued in the billions, local fans are being priced out - and the clubs' local identities are fading. The Premier League has become the classic business fable for our globalised world. Drawing on dozens of exclusive and revelatory interviews from the Boardrooms - including Liverpool's John W. Henry, Tottenham's Daniel Levy, Martin Edwards and David Gill at Manchester United, Arsene Wenger and Stan Kroenke at Arsenal, Manchester City's sporting director Txiki Begiristain, and executives at Chelsea, West Ham, Leicester City and Aston Villa - this is the definitive bustand boom account of how the Premier League product took over the world. Ver Descripción del producto