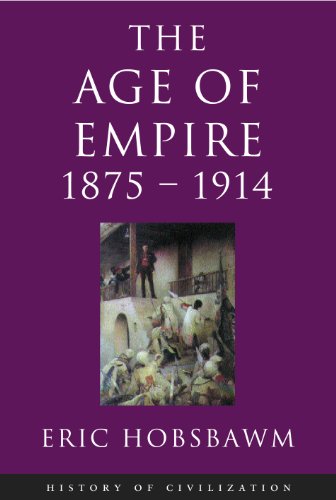 THE AGE OF EMPIRE is a book about the strange death of the nineteenth century, the world made by and for liberal middle classes in the name of universal progress and civilisation. It is about hopes realised which turned into fears: an era of unparalleled peace engendering an era of unparalleled war; revolt and revolution emerging on the outskirts of society; a time of profound identity crisis for bourgeois classes, among new and sudden mass labour movements which rejected capitalism and new middle classes which rejected liberalism.

It is about world empires built and held with almost contemptuous ease by small bodies of Europeans which were to last barely a human lifetime, and a European domination of world history, which was never more confident than at the moment it was about to disappear for ever. It is about Queen Victoria, Madame Curie and the Kodak Girl, and the novel social world of cloth caps, golf clubs and brassieres, about Nietzsche, Carnegie, William Morris and Dreyfus, about politically ineffective terrorists, one of whom, to his and everyone's surprise, started a world war.

With the AGE OF EMPIRE, Eric Hobsbawm, Britain's leading historian of the left, brings to a dazzling climax his brilliant interpretative history of 'the long nineteenth century'.