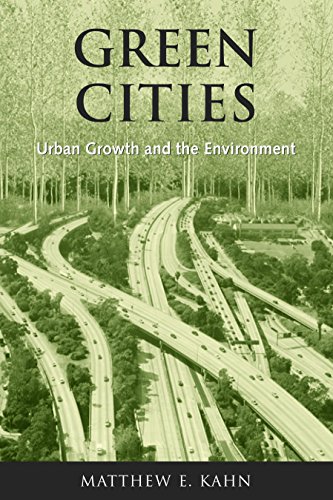 What is a green city? What does it mean to say that San Francisco or Vancouver is more "green" than Houston or Beijing? When does urban growth lower environmental quality, and when does it yield environmental gains? How can cities deal with the environmental challenges posed by growth? These are the questions Matthew Kahn takes on in this smart and engaging book.

Written in a lively, accessible style, Green Cities takes the reader on a tour of the extensive economic literature on the environmental consequences of urban growth. Kahn starts with an exploration of the Environmental Kuznets Curve (EKC)—the hypothesis that the relationship between environmental quality and per capita income follows a bell-shaped curve. He then analyzes several critiques of the EKC and discusses the implications of growth in urban population and surface area, as well as income. The concluding chapter addresses the role of cities in promoting climate change and asks how cities in turn are likely to be affected by this trend.

As Kahn points out, although economics is known as the "dismal science," economists are often quite optimistic about the relationship between urban development and the environment. In contrast, many ecologists and environmentalists remain wary of the environmental consequences of free-market growth. Rather than try to settle this dispute, this book conveys the excitement of an ongoing debate. Green Cities does not provide easy answers complex dilemmas. It does something more important—it provides the tools readers need to analyze these issues on their own.