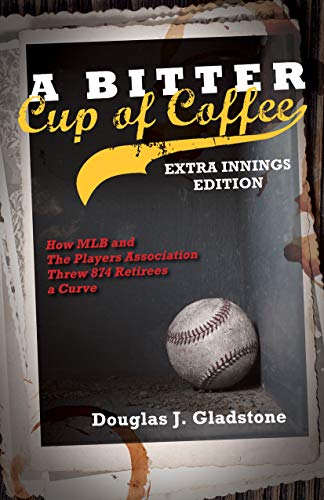 UPDATED SECOND EDITION:This painstakingly researched book by Douglas J. Gladstone examines the plight of 874 Major League Baseball players who played between 1947 and 1979, all with brief trials in the majors, careers figuratively “just long enough to drink a cup of coffee.” Since 1980, Major League Baseball players have needed one day of service credit for health benefits and 43 days of service credit to be eligible for a retirement allowance, but those former ballplayers who played during the 1947-1979 seasons were not included retroactively in the amended vesting requirement, and so receive no pensions for the time they gave to our national pastime. These men, the author suggests, have gulped bitter cups of coffee.In his careful examination of this issue, which includes many interviews with former players and some poignant stories of their plight, Gladstone asks his readers to examine our national relationship to sports and its heroes, as well as our relationships with those who precede us in the game of life.A lifelong baseball fan, DOUGLAS J. GLADSTONE is a journalist by training, whose published articles have appeared in the Chicago Sun Times, Baseball Digest and the San Diego Jewish World, among others. This is his first book.DAVE MARASH (Foreword) has been a working journalist for more than 50 years. Best known for his 16 years as a correspondent for ABC News Nightline, Marash won Emmy Awards for his coverage of the wars in Nicaragua and Bosnia, the Oklahoma City bombing, and the explosion that downed TWA Flight 800. He anchored the opening season of Baseball Tonight on ESPN and did play-by-play coverage of the New York Knicks and Rangers.